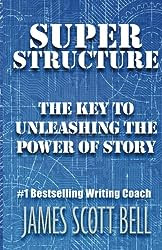 James Scott Bell is a popular and successful author, with many novels under his belt.  When he has something to say about writing, I'm generally going to listen.  I recently purchased his book Super Structure: The Key to Unleashing the Power of Story by Mr. Bell and have been reading it over the last few days.  This review will share what I learned from the book as well as my comments about the book itself.  It's important to note that there is much more in the book than I'm sharing here.

There are plenty of people out there, as Bell notes in his introduction, who view any mention of structure as though it implies a kind of "cheating" or "cookie cutter" approach. I disagree.  A story structure like Bell proposes in this book could be misused and treated as a rigid template to which you positively must adhere.  If that's how you view it, you're doing it wrong.  A structure is nothing more than a recommendation that says "Successful stories tend to do these things in approximately this way. Consider doing these things, but ultimately do what serves your story best."

Bell proposes a three-act structure with 14 different "signposts" that your story may pass on the way to its end.  The most critical of these are:

You can produce a good story with just that minimal amount of structure.  To take the story to the next level, you'll want to look at the full set of signposts:
Bell provides much more detail about these signpost events, including examples from popular books and movies, in the book.  I'm not going to do that here.  The examples he provides are detailed enough that you can use them without being familiar with the works involved, although there is a very good chance you'll be familiar with some of them (if not all).  Bell also explains for each signpost above why it works, how plotters and pantsers can use the signpost, and ways to brainstorm ideas for these.

Apart from the structure advice, the biggest take-away for me from the book was Bell's suggestion that you will want to brainstorm lists of possibilities for many of the signposts above.  Often, the ideas that pop into our head first are the least original and most cliched.  The more ideas we come up with, the more likely we'll hit on something original that really helps the story.  For example, you might brainstorm all the possible Q Factors that might help the Lead out during the Lights Out moment.  The more you come up with, the more likely you'll hit on something that surprises the reader.  You'll also want to brainstorm possible opening lines and possible ending scenes for the same reason.

At the current Kindle price of $2.99 at the time of this writing, Super Structure provides a lot of good writing information and advice on story structure.  If you're struggling with story structure, it's an inexpensive way to learn more about it.  I expect to refer to my notes from the book for some time.
Author: Michael Salsbury at 7:30 PM